Mature trees need a knowledgeable and experienced arborist that recognizes specific needs as they differ from younger trees.

Tree pruning should only be completed with an understanding of how the tree will respond to each pruning cut.

Making large cuts on an older tree could prove to be damaging as they have less ability to compartmentalize and seal exposed wood which can lead to rot.

No branch should be removed without a reason.

Also, a more conservative approach should be taken when removing volumes of foliage. Mature trees cannot handle improper pruning as they will become easily stressed.

Remember that improper tree trimming/pruning is detrimental in that it can create a hazard/liability on your property.

Improper pruning causes damage that will remain with the tree for its entire life or even shorten a tree’s lifespan.

Improper pruning is a significant health stress for any tree.

Proper tree pruning can maintain good health & structure while enhancing the aesthetic and economic value of your trees.

In Southwest Florida most routine tree pruning to remove weak, diseased, or dead limbs with the proper percentage of foliage removed (with respect to species) can be accomplished at any time during the year with little effect on the tree.

Audubon EagleWatch on Marco Island contacted Signature Tree Care on 9/16/20 and requested our help to remove plastic casting net in one of the eagle’s nests. Rosemary Tolliver, volunteer for the Audobon EagleWatch, was directed to Joanna Fitzgerald at the von Arx Wildlife Hospital of the Conservancy of Southwest Florida who in turn provided the name of Ian Orlikoff, owner & lead ISA Certified Arborist of Signature Tree Care in Naples, Florida.

She contacted us for when studying the eagle nest, she noticed a cast netting entangled within the nest site. After consulting with the Audobon Society, permissions were required from federal and state authorities to remove the netting. 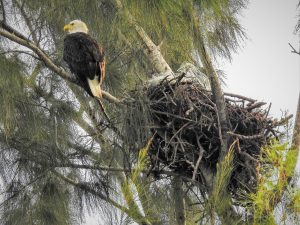 On September 18,2020 the Signature Tree Care team consisting of Ivan, Shelton, Ryan & Ian Orlikoff, lead ISA Certified Arborist arrived on site. Utilizing the Ronin Lift ascender, Ian accessed the nest safely to remove the netting.  As evening drew, both eagles were back in the nest. Remember to enjoy yourselves on the water when out fishing but properly dispose of your netting and fishing lines. See & Read More:

Below are: Article in Coastal Breeze News; Youtube video & pictures below by Frank Steiger Photography. 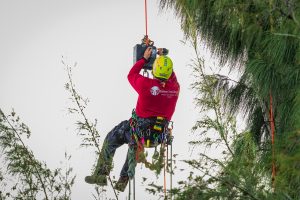 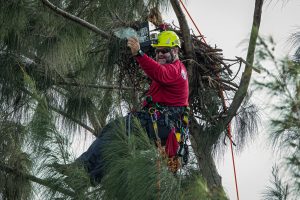 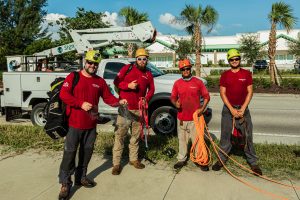 The precariously built osprey nest on the left of number 17 fairway was overwhelmed by the massive amount of rain we received in the storm this past Saturday and most of it came tumbling down. There was a juvenile osprey that fell with the nest. Thankfully, Marcie Watts noticed the juvenile on the ground and contacted me to help. I came out with my son Trevor and we safely captured the osprey and took it to the Conservancy’s hospital.

The veterinarian gave the bird a clean bill of health and thanks to Signature Tree Care re-nested the juvenile into a temporary crate for a nest this past Monday. The juvenile has since taken flight and is learning to hunt for fish with mom and dad. The osprey still sits on what is left of the old nest. Later this summer Brian Beckner will be constructing a platform in that tree so there is a stable location for them to build next year’s nest.

Thank you for taking the time to write to us Mr. & Mrs. C.

This Naples Palm failure was due to a root disease called Ganoderma which slowly decays the root system thus increasing palm’s risk for failure. Palm fronds were green and healthy making it difficult to recognize a potential problem to the untrained eye.

One way to tell if a palm has ganoderma is the white button (immature) or brown (mature) conch or shelf mushroom grown at the base of the trunk. This wind event only aided in its failure.

The recent Naples storm blew the palm over. Using crane assisted tree removal technique, we safely removed the palm off the roof. Scroll down for 6 pictures.

One way to tell if a palm has ganoderma is the conch or shelf mushroom grown at the base of the trunk. This wind event only aided in its failure. Several other palms failed in this past storm due to this very reason.
https://edis.ifas.ufl.edu/pp100

Live edge wood mantle in Naples,Florida- wood provided by Signature Tree Care, local Naples tree service with a kiln, mill and creating live edge wood slabs with interesting wood from tree removals. In this way, we recycle the wood and save it from going to waste. It gets to enjoy another life and clients and their families get to appreciate the interesting grain and design within the wood.

Two great-horned owlets were admitted to the von Arx Wildlife Hospital at the Conservancy of Southwest Florida in January. The two owlets were admitted after high winds compromised their nests causing the owlets to fall to the ground. One owlet was found in Bonita Springs, the second was from Veterans Park. Both babies suffered minor injuries when they fell which required several days of pain medication and supportive care before they were cleared for renesting.

When asked, Ian Orlikoff, owner of Signature Tree Care, willingly offered his time, staff and equipment to help with the renesting. Von Arx Hospital staff and volunteers first went to Veterans Park where members of the Maintenance staff were eager to help. Signature Tree staff members were there with their bucket truck. When we assessed the scene, multiple concerns were noted, one being the nest was approximately 80 feet up in the tree which was much higher than we originally estimated. The bucket truck wouldn’t reach the nest so a new plan was formulated for the next day.

The renesting crew then moved on to the nest site in Bonita Springs. Once the site was assessed Signature Tree Care staff member, Jesse Porkarski, operated the bucket truck. He attached a wicker laundry basket “nest” to the tree and carefully placed the owlet inside. A nest check at dawn the following morning revealed one of the parent owls in the nest with the other parent perched in a nearby tree. One successful family reunion down, one to go. Staff from Signature Tree Care met Wildlife Hospital volunteers, Tim Thompson and Susan Ferretti, at Veterans Park.

This renesting was completely different. The mother owl was sitting on the nest with one owlet at the very top of the 80-foot tree. The nest was not sturdy enough to return the “fallen” owlet so Ian would need to attach a new wicker laundry basket nest, retrieve the baby from the top of the tree, put that owl in the nest and return the “fallen” baby to the nest as well. The height of the tree made this an extremely difficult endeavor.

Ian is highly skilled but couldn’t guarantee our plan could work until he got up the tree and assessed the strength of the branches at the top of the tree.Ian executed the plan perfectly. Colby Kehres operated the equipment from the ground as Ian maneuvered up the tree using a mechanical pulley system. Using a harness and ropes, Ian climbed the remaining ten feet to reach the baby in the nest.

Both owlets were safely placed in their new nest while the adult owls watched from their perches in nearby trees.A check on the nest the following morning showed the mother owl in the basket; both babies alert and strong as she fed them a freshly caught rabbit. The father owl was perched nearby chasing off every bird that flew too close to the nest. Thank you so much to everyone involved with successfully reuniting these owlets with their parents.

Naples tree service review of Signature Tree Care 8/21/19 from client Terry S. on birdeye website. We thank Miss S. for her time in posting her feedback on our tree work services and our educated and professional team.